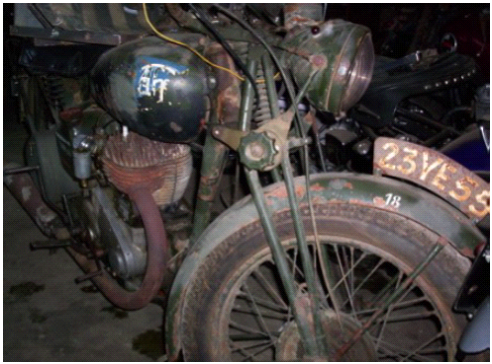 Ah-ha!
Have you ever had one of those Ah-ha moments when for a shining second you see yourself through someone else’s eyes? Well that moment came to me last week. I had visitors from SRM in Wales, you know the folks who make all the really cool BSA stuff? Ken and Jill came at my offer to show them around the old mining camps of Death Valley. We used my trusty old 4 runner and visited the usual Randsburg, Johanasburg, Red mountain but then headed off to Lookout City and Ballarat, with a stop at Leadville and Ryolite for good measure. We stayed at Death Valley Junction one night and if you want to experience what a 1910 layover on the old Tidewater and Tonapah railroad was like this is your stop. If you value modern amenities you may find them in short supply however. We visited Warm Springs and Panamint Resort, we highly recommend the restaurant at Panamint springs it is the best for 75 miles.
Upon returning to civilization we had a day to kill so Ken offered to help pull my bike collection out and sweep the barns out. Being dead keen on cycles himself Ken really wanted to take photos of all the bikes. “How many bikes do you have?” asked Ken. Well I didn’t really know, maybe 40 I said. We began airing up tires at 8 AM and by 1 PM we had lined up the collection up one side of the drive and down the other. The finial count was 71 motorcycles. I know some would say that is a bit light and indeed my top number was 158 but seeing the line of once beautiful and now dusty and some cases rusty bikes through Ken’s eyes made me do a double take.
It is impossible to have a collection like this in Europe or England unless you are incredibly wealthy and well connected (I am not). I was airing up the once brand new Avon tires on my never had oil or gas 1951 Tiger 100 and noticed they had badly rotted at the place where they met the concrete. The $2000 worth of new chrome was tarnished and at some point another bike had brushed against the $1200 paint job leaving a gash on the rear fender. My WM20 rolled out on 2 new but rotten K70 tires and even started on 15 year old gas still in the tank (my bad). The latest tags on the sea of license plates told the story better. I must have intended to do some riding in 2008 because most of the plates had that as their latest sticker although a few had later stickers stuffed between the tank and seat. It was embarrassing rather than enjoyable to realize that as the guardian of these machines I had fallen down on the job. Which brings me back to the article I wrote a few issues back. How many of us share this story? I recall having one Norton 850 (still have it too) and riding it every day. It always shone brightly and the idea of a tire rotting was impossible. I liked the Norton because I could put the new tire on the front and put the old front tire on the rear, same size tire front and back you see. I became a two bike guy when I bought my 1956 DB34 Catalina to use as my dirt bike. I became a 3 bike guy when I saw a bunch of fellows riding new Honda XR 500‟s actually sitting on the seat while trail riding! Sitting on the Goldie was mostly out of the question. I became a 4 bike guy when the WM20 came along and so it went through a garage and then a spare chicken coup converted to storage and then to a 40×40‟ barn and then an added 40×60‟ barn and the 4 – 40‟ containers. So my question to you is this, how do we as a group of collectors begin reversing the above trend without flooding the market? Are we waiting for the first one of us to blink before the barrage of bikes hits or do you think the market is large enough to absorb our vast assortment of collectables?