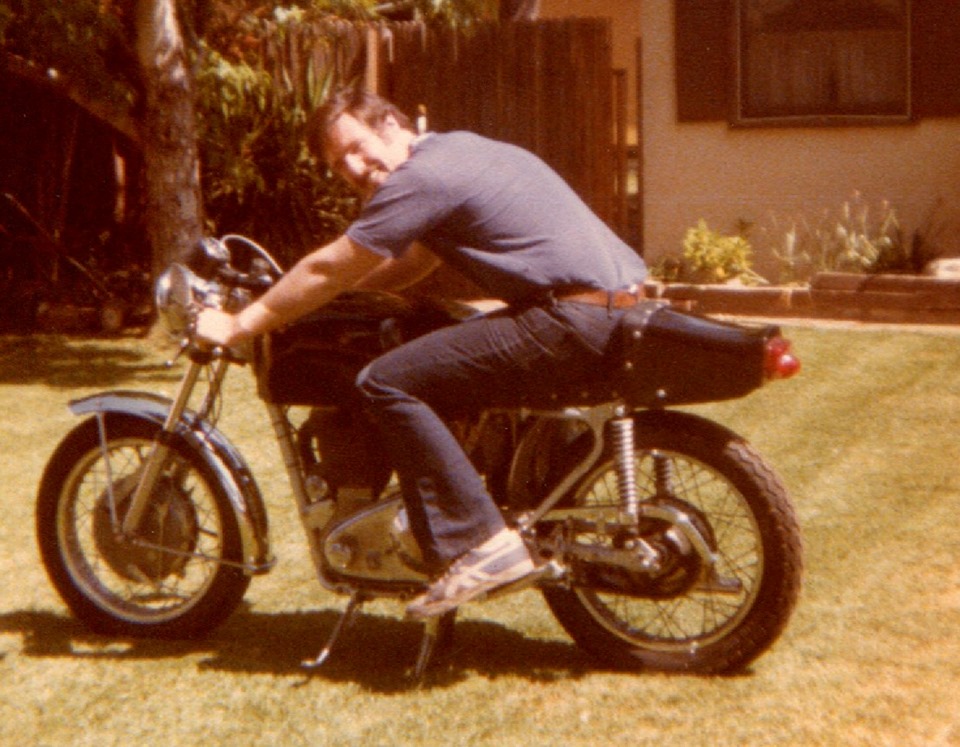 How to: Being a poor broke cycle guy

In 1976 I was working for Cycle Rider Santa Ana, a local accessory shop, as manager. My lovely wife and I were able to buy a house in Fullerton for the princely sum of $29,500.00 to be close to my friend at the time, Billy. Billy and I were not good for each other and would often push each other to buy things we didn’t need or couldn’t afford. Problem was Billy was a carpenter and had much deeper pockets that I had. Also I was determined to retire my mortgage early so always took the path of least expense. All spare money went to retire that mortgage. (We did retire it in 10 years). So while Billy was buying a new Ducati 900SS from House of Triumph/Suzuki I traded my old pickup for a basket case 1951 BSA gold Star. We uncrated Billy’s new Ducati in his driveway after collecting it from Belkin’s moving and storage where the imported had stashed the bikes, seemed they were not selling well. I recall quite a few in wooden crates stacked up!

The BSA was in pretty rough shape even then. It had been a dirt bike for some of its life and then abandoned until D&M Cycle salvage took it in. Being a regular at the salvage yard John Dean offered me the thing for my same year Chevy truck. I did the deal mostly because the Chevy had no 3rd gear and was at least 10 different colors. The BSA for its part had been customized with chrome tape on any exposed surface that would hold it. That stuff was really hard to get off too. Under the tape was rust, and lots of it. Being a poor broke cycle guy I bought a cheap brush and a can of black Rustoleum and painted everything without bothering to dismantle anything. I ordered a piston from MC Supply in LA. They sent along a lovely Alcoa Alloy piston with grooves cut around the skirt, for “lubrication” but in reality a place for the balled up alloy to go when these high expansion pistons seized. Assembling the top end I found that the piston hit the head! What to do but file on the piston crown until it didn’t. That was a lot of filing using a wood rasp. When the piston no longer hit I bolted the top together, cleaned the carburetor and filled the ignition points and set the timing. Imagine my delight when the thing actually started. I zip tied a tail light on the rear trailer fender and hooked up a pair of “D” cells with a flashlight bulb taped into the MC Supply Japanese tail lamp. A quick easy cheap trip to DMV and I even had a plate for it. Lucky for me the guy who had owned it happened to be in the DMV parking lot when I needed a couple more signatures. My maiden voyage lasted about 30 minutes until with a loud bang the bike stopped. I looked it over and found that the magneto drive gear nut had come loose and the mag no longer turned. I took the timing cover off and set the timing sort of and tightened it all up. That lasted another 3 miles and then the same thing. So working my way home a mile or two at a time I discovered that the drive pinion for the mag was cracked clean through, most likely what had side lined the bike to begin with.
I had some fun with the bike but it was a solo bike and being newly married I needed a place for my sweetie. I traded the BSA away for a sailboat that I traded to John for my old truck back. Billy found that the Ducati was a bit uncomfortable to ride so he bought a new left over Norton 850 Commando. I had bought a new 850 Norton in 1975 , one of our early extravagances but deemed necessary as Norton was on the ropes and I wanted a new one before they disappeared. Billy and I did some touring with the Norton’s and I still have mine, now with 135,000+ miles on.
I acquired a Matchless from Motorcycles Only in LA in about the same shape and built a café racer out of that one. And so began a life of, as my friend Robert Fisher says “making chicken soup out of chicken poop”.