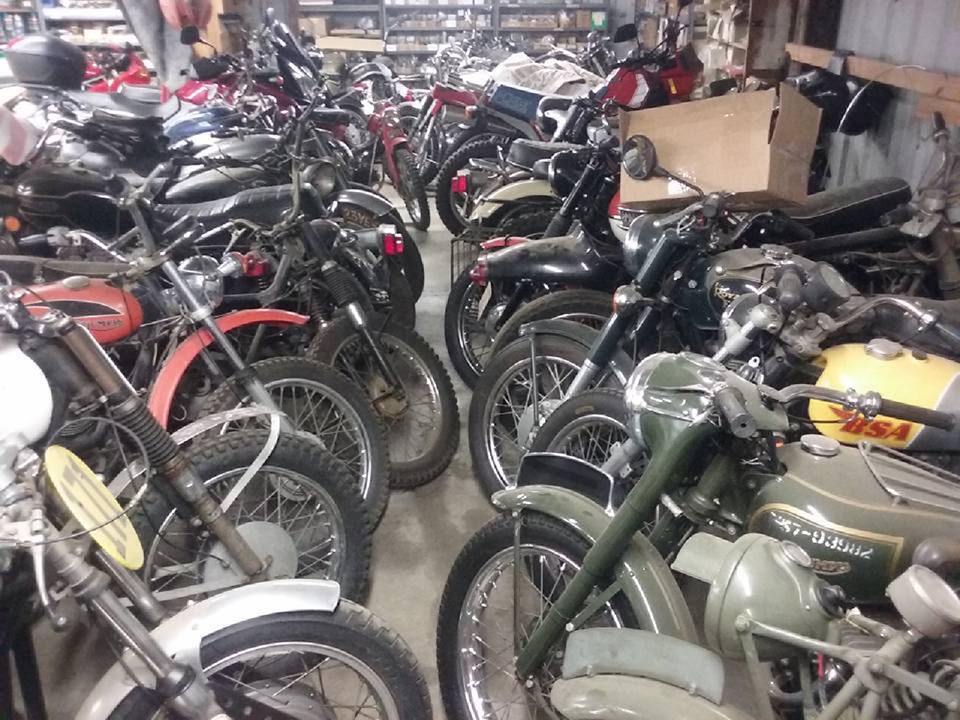 I have always been a entrepreneurial sort of person. It began with buying a bag of hard candy for $1 that had 25 pieces and then selling them in elementary school for $.10 each thus making a handy $1.50 profit. Hansom money when my weekly allowance was $.50. Later I did the lawn mowing thing and a brief stint as a paperboy. Then my life changed. A friend of my father had a Honda 150 in the back of his garage and wanted $25 for it. I bought it and spent a day polishing the thing until it looked new. I then sold it for $150. I quickly realized that I would have to mow lots of lawns or sell mountains of candy to make that kind of scratch in a day. I began looking for bikes to buy and became friends with John Dean, the local salvage yard owner.

Bikes were plentiful and buying was easy. The foreign buyers hadn’t yet discovered the vast supply of used and unwanted British bikes in the states so they were almost free. Sometimes they were free. I bought a 1959 BSA Gold Star DBD34 for the huge price of $500 from the parts guy at the Suzuki dealer in Inglewood. He was saving to buy a Silk 700 motorcycle. I was at John’s D&M Cycle salvage one afternoon when a fellow offered me a cycle he had in the back of his truck. I wondered why John hadn’t bought it and went in to find out why. I didn’t want to upset John. John just smiled and said the bike and seller were a police trap to catch people willing to buy a stolen bike. I wasn’t as careful about paperwork as I should have been but I sure wanted no part of that adventure. John was a different sort, he had a sawed off shot gun under the counter at his shop and I am sure he would use it.

When I opened my own shop in 1980 we advertised in Yellow Pages from San Diego to Las Vegas to the Valley that we buy bikes. Some of the local shops complained and but my friend Dick Symonds merely made sure he had a larger ad in my local yellow pages right over mine the next year. We would buy 5 or more bikes a week and I had one man working full time to part them out if they were at all rough. The nicest Triumph in Southern California was only worth about $1200 in those bygone days. An engine overhaul was under $600. I had 4 employees at the time and on Saturday we would have a contest to see who could buy the cheapest bike. John Hurt still holds the record for that one. John was a morose sort who rarely smiled. He would walk out with the seller and deadpan offer a ridiculous low price and often get it. On one Saturday a fellow rode up on a brown Triumph chopper. John went out and made an offer. The guy fumed for a bit and finally came in to get paid. John gave the man $35 for his running Triumph 650 chopper. The poor fellow asked for bus fare and John said “you got $35” and with that the fellow left. The next week a guy brought in a Norton 750 chopper that he had “rebuilt”. Our job was to set the timing and make it run. When we started it the bike made horrible deep down noises. Obviously there was something amiss but the customer paid his bill and rode away, for about 200 yards. Then the bike went bang and a rod poked through the crankcase. The owner pushed it back and asked if we had anything for sale. I pointed to John’s $35 brown Triumph. “How much?” asked the man. $500 was what I remember telling him , “but I will deduct the $75 for your recent work if you’ll let me have your Norton”. Which he agreed to.

I was called to come look at a collection of Norton parts in Escondido some years ago. The man met me at a store parking lot and told me to follow him. We drove around in circles for a while before driving down a driveway in the expensive part of north Escondido. There was a Norton land speed bike that had been crashed hard along with many boxes of parts, all under a huge tree. The tree had shed sap and leaves on the boxes holding in moisture and the stuff was pretty rough. A deal was struck and money changed hands. I later straightened out the bike as a display bike only, it would never be suitable to race. Some years later a truck pulled down my drive and 2 men got out. One identified himself as the brother of the fellow who died when the Norton was crashed. He accused me of stealing the bike and noted that the man who sold me the stuff didn’t have the title to it and was the drug addict son of the deceased. To keep things calm I asked what he wanted. “If I had a title the police would be here” is what he said. So to keep from problems escalating we loaded the bike in his truck. Not so much as a thank you either.

We were buying 3 to 6 bikes per week in the mid 80’s. In addition we were buying loads of inventories from all over the state. One buy was Los Angeles Cycle Salvage. Jim was the owner and a really friendly fellow whom I knew from my Flanders sales route. His mechanic Mike had been on the set of Grease 2 the movie when they were shooting the heaven scene with a number of bikes all painted white. They were shooting in a high school auditorium and had loads ow white paper and cotton batting to add to the fluffy heaven scene. It was then that Mike was reaching over a bike when the crescent wrench he carried on his belt shorted across a battery and sparked the heaven decor into flames. The production company filmed the auditorium burning down so it wouldn’t be a total loss. I was at Jim’s place to buy all his British stuff along with the collection of roasted British bikes that had suffered through the fire. I recall a blackened BSA B44 that had the tires burned off but still would start and run. That buy took 20 some trips with my truck to move.
More recently I bought out Rocket motorcycles in San Diego. That place had about 20 tons of stuff that all had to be hand carried down a flight of stairs. That one filled my Dico trailer 4 times along with my long bed Dodge. I hired a few friends to help move the 30+ engines along with the thousands of engine gears!

Raber’s auction was my last big buy. Bob has been a good friend for many years and I volunteered to come up and help get ready for the Wood’s auction company to downsize Bob’s huge collection of parts. I was to get some of the 40 motorcycles Bob had collected over the years running. I was set up with a work stand and given the run of the place taking whatever was needed to make a hulk into a bike. My friend Rob Fisher calls this “making chicken soup out of chicken poop”. One of the best bikes was a 1974 Trident that had the rocker boxes and carburetors off. It went together pretty easily and cleaned up almost new. It ran better than any Trident I have ever owned also. I think it went for $5500 at auction, a good deal for a friend of Eddie Mulders. I was able to resurrect a few Commando Nortons and a number of Triumph twins. It was actually great fun to be able to work for hours uninterrupted , a time I treasure. It was a shame how the auction turned out and I have written about that in a previous issue but I did bring home a rental box truck full along with my truck and toy-hauler full.
I am still hopelessly hooked on bike buying. I recently bought a BSA A10 Golden Flash and a BSA A7SS that I will get running “someday”. I have this issue where some may see a rusty frame and blown up engine I see a restored and done motorcycle! I suppose that sooner rather than later I will need to stop this insanity but 82 motorcycles seems like a lopsided number. Perhaps as when a famous man was asked how much money is enough, he answered “just a bit more” applies to motorcycles as well. Ed.