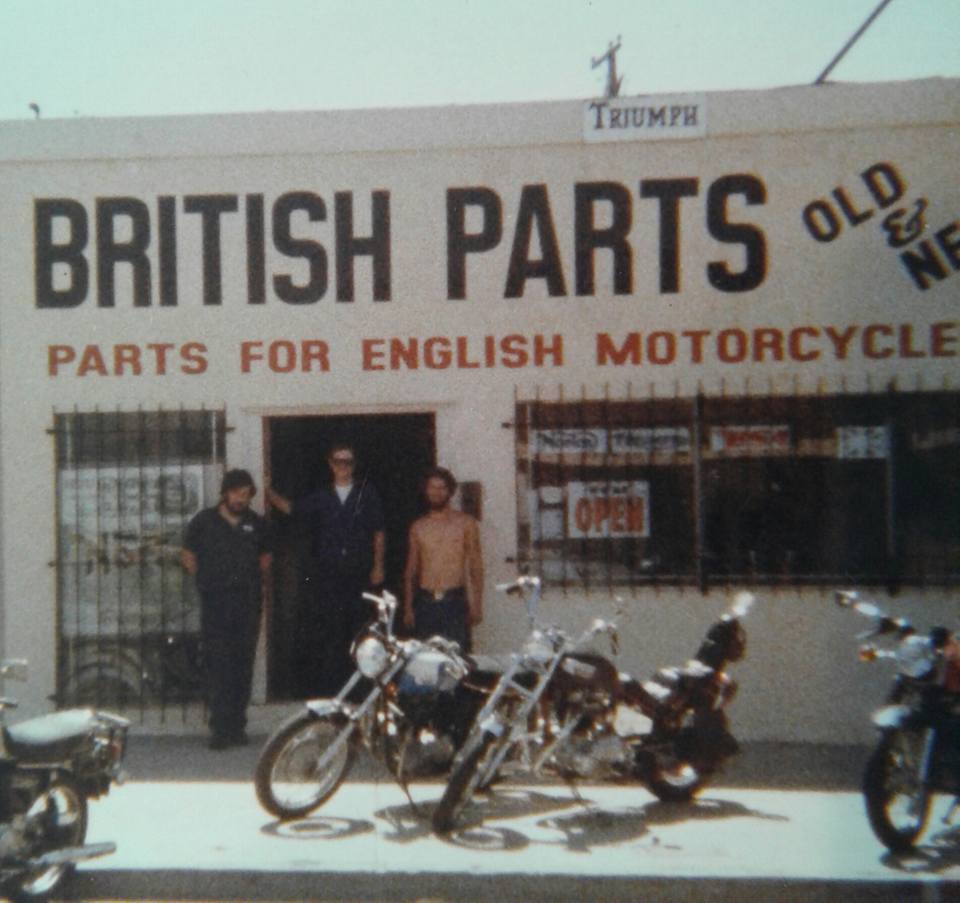 October 1, 1987 was a Thursday. My shop British Parts old & new was on the corner of Carmenita and Telegraph road in Whittier California. This particular Thursday I was up and riding my 850 Commando on my 45 mile commute from my home in Glen Avon by Riverside Ca. into Whittier. At 7:42AM a 6.1 earthquake hit Whittier Narrows about 3 miles from my shop.
British Parts was in an old building located in a small triangle of land unclaimed by any city and so part of LA county. That worked in my favor as the Whittier, Santa Fe Springs and La Mirada city planners had all refused to give me a business license but when given the address were happy to see I wouldn’t be besmirching their cities. My drive that day was uneventful and being on a motorcycle I didn’t even notice the shaking while on the 60 frwy. When I arrived at the shop to open at 8:30 am it was apparent something big had happened. The shopping center across Telegraph had lost a number of facades and there was smoke rising from numerous fires in the neighborhood. The power was off also.

The building my shop was in had started life as a market in 1907 according to a local. It had been a number of things and had been a motorcycle shop for over 40 years previously. The building was wood siding over full on 2×4 studs with a flat (and leaky) roof. When I arrived my employees were waiting. I tried to open the front heavy wood door but it wouldn’t budge. Jeb and I leaned into it and it grudgingly moved but was blocked from the inside. Pushing harder we were able to get inside.
Malcolm Milligan had been working for me for some time and when he wasn’t too busy I had him paint gas tanks for sale. These were on nails in the wall and hanging from hooks in the roof. There were many dozens on painted tanks along with other goods on the walls. In addition we had 5 rows of shelves with our extensive inventory on. Except that now none of that existed. Customer bikes were rolled out every morning and back in every evening crammed into a space that was way to small. The quake had all these bikes banging back and forth against each other, except when tanks fell like metal flake bombs into the rocking and rolling mass of bikes. The parts shelves were made of 1×12 pine and had no problem spilling hundreds of parts boxes into jumbled piles on the floor. My first impulse was to cry but thinking better and being grateful that the place wasn’t on fire like so many others I just closed the door and taking the staff to the Spires across the street we had breakfast. Not sure how they had power and we didn’t but they were in Whittier proper unlike us in the county.
After breakfast we returned to the shop to begin the task of cleanup and evaluate the damage. When opening the front door it seemed as if the building was hanging over me, as indeed it was. The building was leaning out toward the street by 8 inches from the roof to the floor. That gradually returned to normal over the following few weeks. We piled shovel loads of parts into milk crates to be sorted later. In reality it was easier to restock from our vendors than to sift through the debris and so much of that was sold by the crate full. In the end a few customer bikes suffered some minor damage from falling tanks and a few tanks were dented and one Lucas light unit was cracked but within 2 weeks we were back to normal. We began reinforcing our shelving for the next quake and continue to do so at our current business in Perris Ca.
In 1987 200 people were injured and 8 killed. Hundreds of homes damaged or destroyed and many businesses damaged beyond repair.

That we weathered that one so well is a blessing, although it didn’t seem so that first day. Lest we become complacent in the distant memory of such events we are reminded that the LA area is overdue for a similar or worse event.