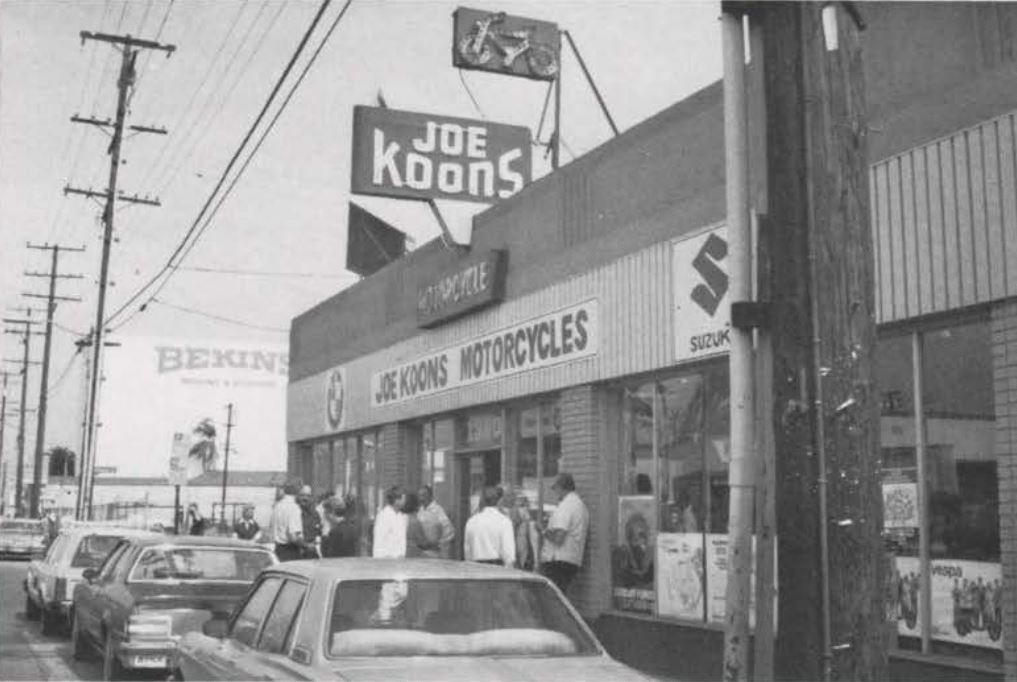 Stories from the past

The way we were,

In the glory days of British motorcycle it seems there was a dealer in every town. I can remember 3 Norton dealers in the Whittier area alone. One of the larger dealers in the Long Beach area was Joe Koon’s Motorcycles.

Joe carried Indian, BSA and Vespa cycles. Joe had in his employ a number of rather famous names from the day. One of those was the famous Jack Simmons, known for his exploits with Bill Manley and George Kerker as the Norton Wrecking crew.

In his days as a mechanic for Joe a number of interesting events occurred that Jack shared with the author. I would like to share a few with you for your entertainment and to give a flavor for the way cycle shops were.

One day a sailor approached the head salesman, one Clif Majhors known later as “the Sandy Bandit” but that day a BSA salesman. The Navy man wanted a BSA B33. ’Have a look at this fine used machine” cooed Clif. “Not that ugly black thing, I want a chrome plated bike!” said the swabby. “Come back in a week and I will have just the bike for you my man” assured Clif. For the next week Clif painstakingly polished every part one could unbolt to make the bare steel shine like chrome. A week later the deal was struck and the sailor rode off on the most brilliant bare steel BSA ever, so if you find an especially rust B33 now you know why. Blame Clif! (Mark Hoyer at Cycle World wrote an extensive article about Clif Majhor Read it here)

The “Proper” way to ride a Vespa

Another occasion a college student brought in his crashed Vespa for repair. Joe gave the job to Jim Hunter (Yes that Jim Hunter!). Jim did what he could but he complained that he was not a frame man. “Do what you can” said Joe, and Jim did. The customer rode away on his repaired bike but came straight back. “It pulls to the left” he complained. “Well you see it’s like this” explained Jim, “I watched you ride away and you are doing it all wrong, no wonder you crashed!” exclaimed Jim. “You’re sitting on the seat all wrong, you gotta sit more to the right side see”. After a short ride the college guy said “Thanks, your right that fixed it” and rode away happy.

Joe used to carry his own contracts and had sold a Gold Star to a sailor who had fallen behind with his payments. Joe heard the bike was at Ernie Pico’s shop and sent Jack Simmons to collect the bike. Jack walked into Erne’s shop and announced “I’m here to collect that BSA out back. “Jack assumed Joe had made arrangements with Ernie. “You ain’t takin that bike Jack” was Ernie’s reply. Jack went across the street to a pay phone (No cell phones, a cell was where drunks slept it off in those days) and called Joe. “You come back with that bike or don’t come back” was Joe’s answer. Jack never did get the bike and Joe never did collect his money. Fast forward 30 years and Jack and your author were at a swap meet and up walks Ernie Pico. Pleasantries were exchanged and then Jack mentioned the BSA. Ernie clouded up immediately and drawing himself to his full 5’5” shouted “Joe’s dead and I’m alive so who’s right!” and then being satisfied with the implied answer walked away. Those guys could really hold a grudge!

These are just a few glimpses into how the motorcycle world use to be. Follow these stories on our blog The Way We Were Original stories written by Bill Getty