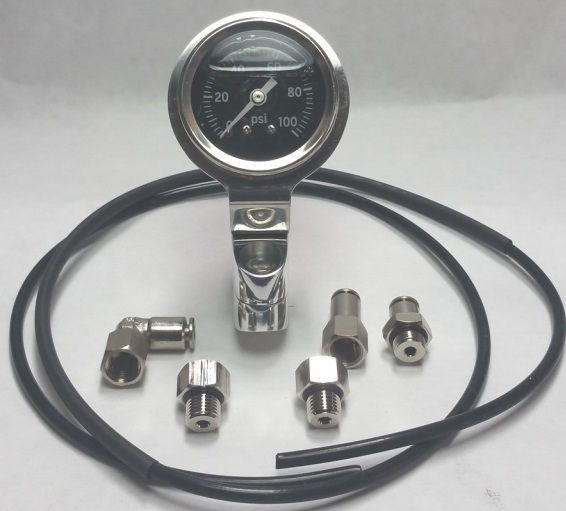 British motorcycles for years had oil pressure indicators located in the pressure relief valve. These were sources of oil leaks and were discontinued in the mid 1960’s. From then until 1969 when a pressure switch was fitted on Triumph and BSA machines oil pressure was assumed but not always consistent. Norton never did fit a pressure gauge assuming that the pump and oil system would be fault free. It is reassuring to see by a gauge just what your oil is doing and can save you many times the cost of a gauge if your oil system fails.

Understanding your oil system. Triumph uses a plunger type oil pump that originated with Ariel motorcycles in the early 1930’s. These pumps have reciprocating plungers with spring loaded check balls to control oil flow. They are very susceptible to impurities in the oil. A small bit of gasket broken loose or a bit of silicone circulating with the oil can hold one of these check balls off its seat causing the oil pump to stop working resulting in major engine damage. Norton and BSA used more modern gear type pumps that were more able to cope with oil impurities. BSA had issues with the alloy pump bodies deforming with use and loss of oil pressure. Norton had issues with the 2 securing studs coming lose and loss of pressure at the pump to case joint.

1. Triumph twins take oil pressure from a plug at the front of the timing cover. Care must be taken here as the thread profile on these covers changed from a British pipe thread (3/8″ x 26 tpi BSC ) to a tapered pipe thread in mid 1968 (1/8″ NPT x 27 tpi ) and then to a straight thread (1/8″ NPS thread ,27 tpi and parallel) in 1969 to 1983. Fitting the tapered thread adaptor to a later cover will break the casting. Also the earlier British tread looks similar to the later thread but is not interchangeable. Do not force the adaptor! If it doesn’t thread in easily try the other adaptors that come with the kit.

2. The Triumph kit consists of the gauge, handlebar mount, high pressure hose and adaptor fittings. Mount the gauge to your handlebars in a place that doesn’t interfere with the control cables or fuel tank. See photo. 3. Set a catch basin under the timing cover and remove the plug or old oil pressure switch from the timing cover. A small volume of oil may leak out during this procedure. Match the thread on the plug/switch with the correct adaptor from your oil pressure kit. Unit Triumph 650/750 covers will interchange and it is not unheard of to have a different year cover than the year of the bike and so a different threaded plug. Do not force the adaptor during installation, the cover is very fragile and easily broken. Use a bit of Teflon tape on the threaded adaptor and gently thread into the timing cover. The adaptor should thread smoothly and all the way into the cover.

4. Press one end of the high pressure oil hose into the fitting on the adaptor. This may take some effort. You will feel a distinct click when the hose seats in the fitting. Gently pull on the hose to be sure it has seated.

5. Route the hose well away from the hot exhaust pipe and zip tie to the frame. Be sure to route so that the steering is not impaired and the hose can not be chaffed or pinched.

6. After routing cut the hose to length and use the same procedure as the case adaptor to press the hose into the adaptor on the back of the gauge. Note that the air bubble in the gauge is to allow the damping fluid in the gauge room to expand and is normal.

7. Turn the handlebars lock to lock to be sure that the oil hose does not impair steering and there is nothing that might snag of cut the hose. Oil is under considerable pressure in that small hose and if cut it will lose a huge volume in a short time.

9. The gauge and hose will give trouble free service for years and should require no further attention. Oil pressure for Triumph should be about 60 – 70 PSI cold and 40 – 50 Hot at 3000 RPM.